Minimalism is not wizardry. It is a fairly straightforward journey. The journey starts with an idea. Gradually, this idea forges a new mindset. And this mindset leads to new habits. Together, these habits create a lifestyle pivoting around freedom, simplicity, and mindfulness.

Design naturally plays a role, but minimalism as a lifestyle goes far beyond decluttering.

Once you grasp the mechanics of a minimalist mindset – as in, focusing your energy on the essentials – you trigger a chain reaction. You stack one essentialist habit on top of another.

How does this work in practice?

After defining your values when it comes to consumption, work, social interactions, and personal growth, you start to identify the main habits that adhere to those values.

Minimalist habits that changed my life

The following are my most life-changing minimalist habits. In the context of forming my minimalist lifestyle, these habits have the most tangible impact.

Many aspiring minimalists wonder whether they need two or three chairs, whether cars are acceptable, and whether they should buy second-hand clothes.

All of these questions beat around the bush.

Minimalism only works in conjunction with intentionality. You learn how to define your priorities in terms of consumption.

Once your priorities are clear, you develop buying habits that adhere to those priorities.

As an example, your main priorities when it comes to transport might be money and efficiency. As a consequence, you’ll opt for public transit instead of a private car.

If, on the other hand, your highest-ranking priority is speed, you might need a personal vehicle.

Intentional consumption is undoubtedly one of several minimalist habits that changed my life.

Why? Because it can serve as an intellectual framework for every consumer decision.

Make a list of all the products you buy regularly. Determine priorities for each category. In the future, buy new things according to your self-defined values.

Over the years, this habit has saved me heaps of time and money. Better still, it also bolstered my mindfulness.

Replacing instead of upgrading

On par with intentional consumption, a one-in-one-out mentality is a life-changing minimalist habit.

There are exceptions, but most of us don’t need the same product twice. In that same vein, we don’t need to upgrade our phones, cars, and laptops every year.

There is nothing wrong with buying new stuff. But more is not better. Only better is better.

Consequently, if you are looking for a better product, identify the flaws of your current product.

If the successor product addresses these flaws, it could be better. And once you have the better version, the reasons to keep the older item gradually vanish.

Let’s take smartphones as an example. Most popular models give way to updated versions every 12 months. Is that a reason to upgrade? Only if the upgrade offers discernible improvements according to your self-defined priorities. In this case, the old version becomes redundant.

Digital minimalism is a complement to mindfulness in everyday life.

The benefits are manifold.

On one side, regulating your social media usage will enable you to utilize the perks of social media. It will, however, also help you avoid its side effects.

As such, digital minimalism isn’t about forgoing the use of Facebook, Instagram, and Twitter. It’s about identifying the right reasons and moments to use the most suitable platforms.

The idea is to establish your set of social media rules. These norms will guide your usage and form your best practices.

As an example, you might use Instagram to build a photography portfolio. Twitter, with its limited options, might be more of a nuisance to your photography. In this case, focusing your time and creativity on Instagram is a sensible choice in the context of your digital minimalism. Acting according to values and principles, not cues

Many people limit minimalism to consumer behavior. Buy less, get rid of useless stuff, and your life will be more fulfilling.

I disagree. I see the essence of minimalism as a catalog of values. We define our principles and direct the bulk of our energy, creativity, and money toward those values.

On the other hand, we minimize the effort and resources we allocate toward things that do not adhere to them.

By adopting this minimalist attitude, you act in consonance with values, not cues. Your actions are the result of your self-defined principles, not external signals.

What are those signals?

Many people make decisions by following externals cues. We pursue a career because it has a good reputation. We buy a particular car because it suits that job. And finally, we dress, behave, and choose our peers in light of our supposed place in society.

Minimalism is the exact opposite.

Over long stretches, we learn what our values are. These values will help us determine the right occupation. The same goes for cars, clothes, and human interactions.

Acting according to principles rather than cues is among the most effective minimalist habits for several reasons.

Secondly, principles lead to satisfaction. Most of our values ensue after a painstaking process, as well as trial and error journeys.

Values can change over time, but they are always there. Once you learn how to implement them, you’ll be more satisfied. You’ll know that you’ve achieved something by making conscious decisions that work in your life.

Let’s take the example of finding the right job. As a minimalist, you set your priorities for your ideal job. It should, for instance, enable you to support public health.

It should also connect you with scientists from all over the country – respecting your value of meeting new people with similar interests. Finally, this dream job should also offer a healthy work-life balance.

It might take years, but once you find the right job according to these priorities, you’ll be much more satisfied than you would if you hadn’t raised your standards.

In the long run, this job could become your financial backbone – and a pivotal way for you to grow as a person.

If you, on the contrary, follow a cue and become a scientist at firm X because it’s well-known and pays well, you might find yourself job-hopping due to a lack of fulfillment.

There’s nothing wrong with job bouncing at the outset of your career, but long-term, you’ll need a more stable, fulfilling endeavor.

In the late 19th century, an Italian engineer called Vilfredo Pareto observed his garden. He realized that 20% of his pea pots were yielding 80% of the peas.

Pareto later theorized this phenomenon and extended it to other areas. In this regard, he found that 20% of the Italian population owned 80% of the land.

His studies gave birth to the now-famous “Pareto principle.”

The Pareto principle is among the most effective minimalist habits that changed my life – thanks to its simplicity. It can be applied almost everywhere.

You can use it in business, sports, and your personal life.

As an example, many first-time entrepreneurs try to attract as many clients as possible. Over time, they become overwhelmed by the number of calls, requests, and other queries they receive.

Hiring new employees is naturally a solution, but if the business wants to remain small, client prioritization can work.

In many cases, a few main clients account for most of the business’ income. That’s where the Pareto rule comes to fruition.

“The important thing is not to stop questioning.” – Albert Einstein

As previously mentioned, minimalism is about establishing values. And these values usually answer relevant questions.

In all aspects of life, questions lead the way forward.

When it comes to consumption, ask yourself: does this item add value to my life?

In your professional life, question the road you’re on. Is this the right professional track? Am I entering a one-way street? Are there enough refueling stops along the way?

As a minimalist, asking the right questions is crucial in the context of prioritization.

Once I started questioning my material needs, my professional values, and my social interactions, I became much more mindful.

Useful links on 6 Minimalist Habits That Changed My Life 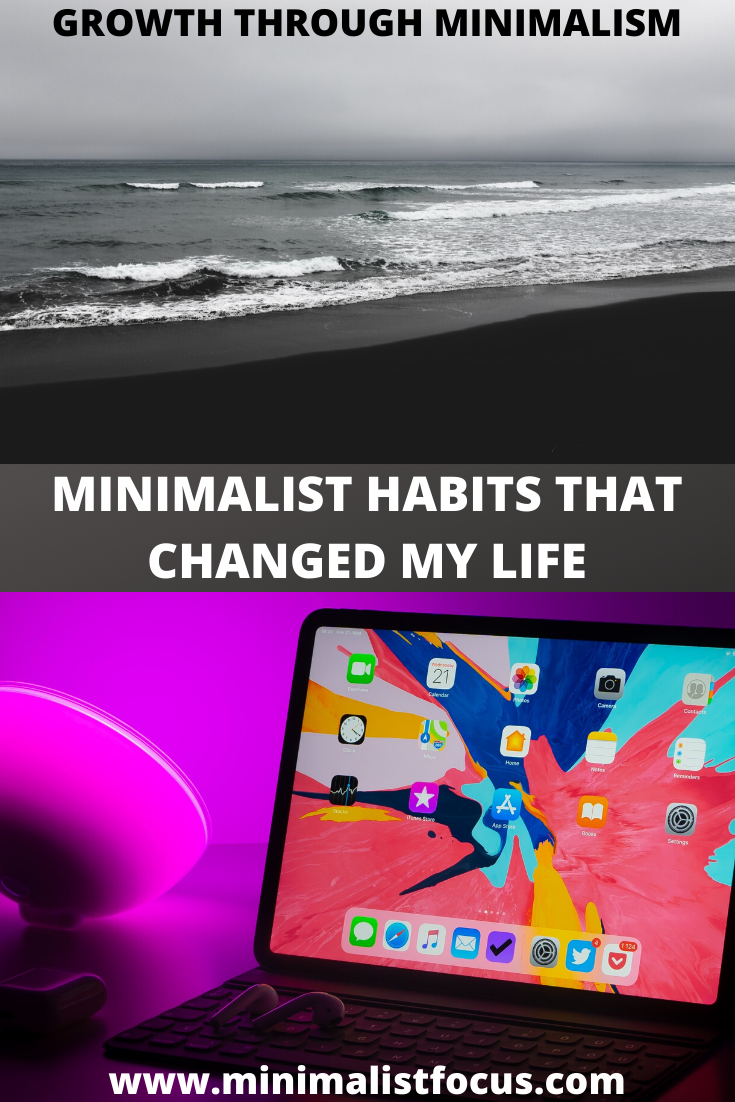