Many people would define minimalism as “living with less” and “letting go.” That definition caters to catchy phrases, but it doesn’t do the larger idea of minimalism justice.

Minimalism is much more than decluttering and simplification. It is a mindset that can be applied in different ways to different situations.

Contrary to popular opinion, the rules of minimalism are not set in stone. “Minimalist living” is a highly flexible concept and naturally open to variations.

In simple terms, even if someone identifies as a “minimalist,” the next self-declared minimalist might have a completely different lifestyle.

The 10 principles of minimalism

Despite the heterogeneity of minimalist lifestyles, most people share a particular set of values. On this basis, here are ten common principles of minimalism. 1. Priorities have to be set

Conscious decisions are the basis of minimalist living and priorities are the result.

By setting priorities in various aspects of life – your work, your relationships, your social life, your physical wellbeing, your spending, and your leisure activities – you automatically make choices.

These choices can lead to more control, more freedom, and more productivity.

The following are some examples of priorities in different domains:

In this context, discovering faraway lands might be more important than buying the new Playstation XYZ. You could prioritize your loved ones over a fifth consecutive alcohol-blurred party night. Your colleague’s tenth “one-off favor” request might conflict with your projects.

These situations require conscious decisions. A minimalist approach will not solve all of your predicaments, but it will streamline the decision-making process.

A good starting point is to make a list of priorities in each area.

When facing a choice, determine what decision would respect your priorities most. The assessment will scale down the options and also remove a lot of guilt.

2. Trends are temporary, timelessness is the way to go

Trends are – by definition – impermanent and always changing.

Fashion is a classic case in point.

Extravagant, uber-conspicuous ideas rarely last. Even if lots of people adhere to a style because of its trendiness, the same group of people will move on as soon as something newer, more fashionable hits the stores.

As an example, brightly colored, oversized t-shirts became a thing in the last two years. Fast forward to the beginning of 2020, and the trend is all but dead.

Always keeping up with trends is a major trap because the pursuit will never end and empty your wallet in the process. Minimalism focuses on timelessness.

When picking the basics of your wardrobe, the emphasis should lie on quality and durability, not instant trendiness.

You can extend this conscience for longevity to other types of consumer goods. By owning a few high-quality, long-lasting items, you won’t have to worry about changing all the time. Better still, it will save you some headaches as well as lots of dollars in the long haul.

For example, If you live in a temperate climate with four seasons, you don’t need five winter jackets as a result of new styles and trends hitting the stores every year. Buy a timeless, high-quality winter jacket today, and you won’t have to worry about coat trends in the next ten years.

People often associate minimalism with sober, prosaic consumer goods. We all know the picture of a white room containing nothing but a small desk, a laptop, and a plant.

Many modern-day minimalists indeed enjoy blank, decluttered interiors, but the idea is not to scale down. The aim is to consume intentionally.

In this context, it doesn’t matter what you buy. It matters why you buy it. You employ a specific thought process to determine whether a purchase makes sense or not.

As such, minimalism doesn’t preclude people from owning three couches and four desks instead of one. Minimalism is about establishing your rules in terms of spending and consumption.

These rules can be variable, but they always exist.

Some people might make all their decisions financially and set a monthly budget for consumer goods. Others might apply a postponement rule and delay every purchase for at least one week to reassess its merit.

There are many ways to adopt a minimalist mindset when it comes to buying habits. The point is to develop a personal spending evaluation system.

4. Minimalists replace instead of upgrading

In the era of digitalization and rapidly improving everyday tech, a new type of addiction is fueling the market: the upgrading addiction. I call this an “addiction” because it has genuinely taken hold of people’s conscience.

Inflamed by an incredible density of product launches, lots of consumers now feel that a product which they were passionate about 12 months ago just doesn’t cut it anymore.

The recent history of Apple’s iPhone is a classic case in point.

Between 2015 and 2019, no less than five flagship iPhones (the 6, the 7, the 8, the X, and the 11)  came out. That’s without counting all the lower-end versions that entered the market simultaneously.

Of course, every version offered improvements and novelties, but it’s hard to justify spending over 1,000 dollars every year for a newer version of the same phone.

As a minimalist, the easy solution would be to simply stick with one phone/product as long as it works and replace it when it’s broken.

A more thorough analysis would be to revisit Principle 1. Write down priorities for each product and see whether the newly launched upgrade has a measurable impact.

5. Money is a means to an end, not a goal in itself

The principles of minimalism revolve around economic mindsets but also around money itself. Lots of personal finance gurus preach frugality to “retire early” and “achieve freedom.”

All well and good, but why should you make X amount of money if you don’t know what the purpose of having X dollars is? Is having enough money to retire at 40 a worthwhile goal in itself?

The issue is that if you live frugally to pursue a monetary goal, your motivation will be too dependent on the money itself. The aspiration will not concern the actual content of your life.

However, the whole point of minimalism is to set priorities and to focus and what truly matters to you. That’s why monetary goals don’t suffice.

Money has to be a means to an end. Achieving financial freedom should not be the only goal. It should be part of a broader vision with more objectives that will create a fulfilling ensemble.

6. Your job and leisure activities don’t matter, your attitude toward them does

For thousands of years, humans have had habitual activities. No matter the cultural background, the vast majority of people perform a routine for a benefit.

The Alaskan Iñupiat tribesmen traditionally spent their days fishing and hunting around icy rivers to secure food supplies. They never had any concept of money or possessions. They had a simple job with a clear purpose.

Would an Alaskan tribesman have questioned why he spent most of his existence hunting walrus and caribou? He wouldn’t. He knew what the purpose of his job was. He needed to put food on the table to ensure his tribe’s survival in the cold.

Knowing why we perform a habitual activity is key to focusing on the task at hand. As a minimalist, the essential point is to recognize the purpose of our job and leisure activities.

Regardless of what we do, we need the right attitude towards our daily activities. We need to focalize our efforts on what we are trying to accomplish.

As soon as we work towards a tangible goal with a clear idea behind our endeavors, we will have the mental freedom to sustain our effort and to excel in what we do.

On these grounds, work essentialism consists of identifying the primary purpose of our activities.

Once achieved, it will be significantly easier to perform our activity over a long period because we’ll minimize doubts and distractions.

7. When it comes to design, minimalists seek a combination of beauty and functionality

Most of the principles of minimalism concern our mindset, but design plays a substantial role as well. Most minimalists would agree that design has to be both beautiful and functional.

Aside from beauty, an object has to be functional to suit the general idea of minimalism. As such, an object that’s both beautiful and functional helps our focus and also betters our mood.

Let’s take the example of Tesla. There have been functional and beautiful electric vehicles in the past. Toyotas are well-built, easy-to-use, and functional. But are they beautiful? Most gearheads would say no. Ferraris, on the other hand, are strikingly pretty, but are they usable in everyday life? Certainly not.

Teslas might have a sniff of controversy about them, but it would be hard to deny their design qualities.

In addition to their beautiful lines, they have propelled the car industry into a new era of practicality, driver aids, and sustainability. Ranking Teslas as the number one cars for minimalists would be an overstatement, but they undoubtedly portray a merger of beauty and functionality. 8. Physical and mental wellbeing is a requirement, not an option

Minimalists don’t question the importance of physical and mental self-care. A sharp mind and a healthy body are prerequisites to focus on the essentials daily.

In concrete terms, working out regularly and practicing mindfulness does wonders for your concentration levels. On this basis, a combination of physical fitness and mental serenity is an essential condition for a minimalist mindset.

If you agree with the concept of minimalism, do not wonder whether you should allocate pockets of time to physical exercise or meditation sessions. The “lost” time will be compensated for by substantial concentration gains in the long run.

9. When it comes to relationships, quality is valued over quantity

The principles of minimalism as a mindset strongly influence the way we handle our relationships and social lives.

Before we analyze this point, let’s address the elephant in the room. The answer is no.

Minimalists do not have fewer friends than non-minimalists. Minimalists are not innately “lonely wolf” characters.

Minimalism as a lifestyle is about making choices, and this also concerns relationships. Of course, having fewer relationships makes it easier to focus on essential connections such as partners, parents, and best friends.

Nevertheless, a numerical reduction of acquaintances is not the point.

As Socrates once said: “Be slow to fall into friendship; but when thou are in, continue firm & constant.”

In less philosophical terms, if you don’t have the time and wit to sustain 20 or more high-quality friendships, you’ll have to prioritize.

10. Less is more but “less” is a flexible concept

As a concluding statement, minimalism is not a clearly defined set of rules. Minimalism is a  way of thinking and analyzing consumer decisions, work ethics, social interactions, and other challenges in life.

By focusing on the essentials, you do end up in a general state of “less.” Less materialism, less consumer addiction, and less burden in general.

The exact definition of “less” is, however, up to you. In other words, you are the architect of your minimalist structure.

To round it all up, the best aspect of minimalist living is that by using a few guidelines, you can tailor your approach to suit your own needs and preferences. Those lifelong skills will ultimately be worth much more than a decluttered white living room.

Useful links on The Principles of Minimalism 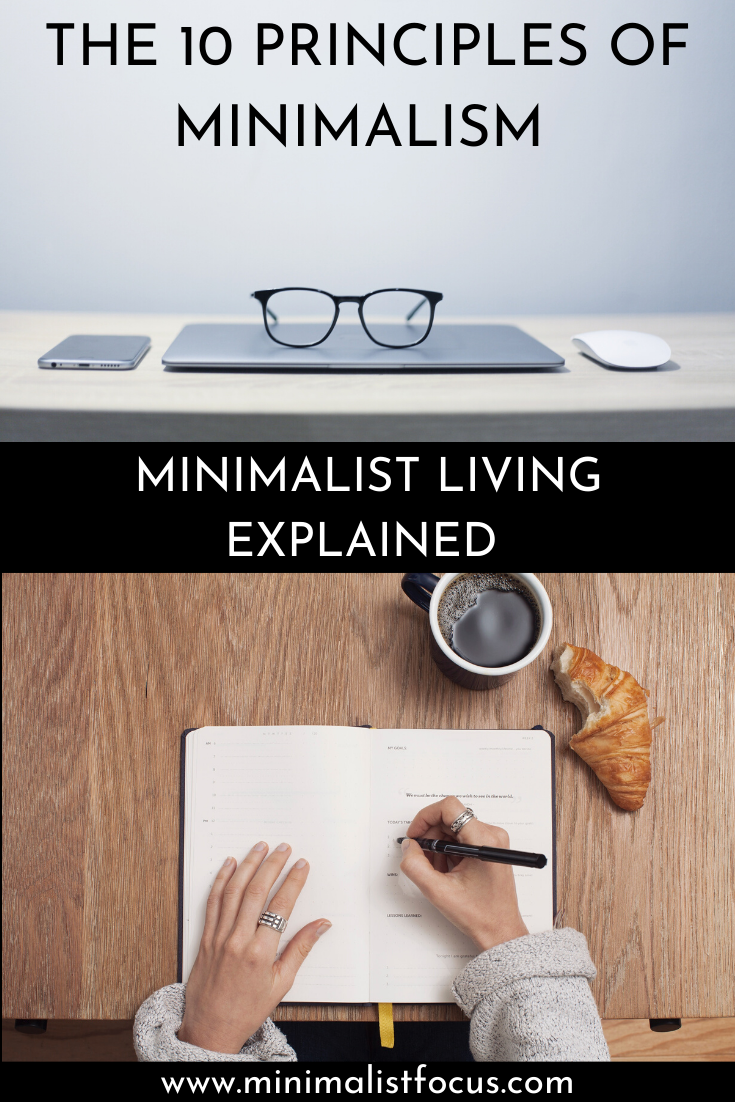