8 Things I Learned Through Minimalism – The Most Important Minimalist Lessons

A couple of years ago, I decided to welcome minimalism into my life. Not because of trendiness, anti-materialism, or even sustainability. Minimalism simply seemed like a clever way to improve my productivity and to travel more. Aside from that, I started to notice many other benefits – unrelated to decluttering. On this basis, here are 8 things I learned through minimalism.

Most benefits of being a minimalist came over time. Minimalism was a catalyst for change and worked itself into different areas of my personal and professional life.

Things I learned through minimalism

Exceeding the obvious advantages of a decluttered home, the real benefit of minimalism is a panoptic surge in mindfulness.

Across the board, you become more mindful of your consumer habits, your organizational methods, and your general routines.

Consequently, the following are my minimalist lessons resulting from a sweeping priority makeover. We all know the Pareto rule. 20 % of our assets produce 80 % of the results and vice versa.

This also applies to the stuff we own. When I first started to embrace the principles of minimalism, I realized that most of my stuff was either outright useless or rarely in use.

I developed a couple of keep or sell rules and gradually managed to separate the essential from the expendable.

As an avid reader, I chose to keep all of my books – over 500 paperbacks – but I also decided to shift toward ebooks about 2 years ago.

Over 3-4 years, around 80 % of my stuff had to make way for my minimalist mindset to flourish. Excluding my books, most of the remaining 20 % now fit into an 80L Osprey Sojourn and a 40L PackSafe Vibe.

Do I miss any of my former possessions? Nope, not even a little bit. Thanks to minimalism, I can roam the world without worrying about material stuff back home.

The 20 % I kept are high-quality, long-lasting items that produce some kind of return – be it financial, emotional, or joy-related.

Consequently, one of the major things I learned through minimalism is to use the Pareto rule in relation to material possessions.

This involves identifying the 20 % that produces 80 % of the results.

Once delineated, these items will serve as references for future buys. Re-evaluate the rest and decide on what you can purge, donate, or sell.

2. Minimalism is bigger than most people think

People usually think of minimalism in practical terms. Eliminate the superfluous and live with the bare essentials.

While some hardcore minimalists rid their life of every single drop of excess, most minimalists don’t live that way.

Most minimalists, in fact, learn how to prioritize by adopting a certain mindset. This mentality subsequently influences their buying habits, work decisions, and social behavior.

My major lessons from minimalism also went that way. By embracing a certain way of thinking, I realized that I could apply the idea to various aspects of life.

This, in turn, led to a much broader minimalist attitude that furthered my productivity, my online mindfulness, and my work ethics.

3. Minimalism is the basis for freedom

The most important benefit of minimalism is the freedom you get from liberating your life of different forms of excess. This freedom is both mental and physical.

Without minimalism, I could never have traveled the world for months at a time and visited 55 countries before turning 27.

I needed both mental and financial freedom to simply “disappear” for a while without having too many commitments or second thoughts.

Even if you’re not into traveling, freedom as a benefit of minimalism makes sense on multiple levels. Using smart, intentional consumption habits can advance your debt payoffs and improve your budget.

Social prioritization, on the other hand, is a hailed road to success and freedom both in business and on a personal level.

In this sense, focusing your energy on the people who matter and the ones who can push you forward is a proven formula that will guarantee personal and professional progress in the long run.

Why do you think Bill Gates and Warren Buffett hang out together?

The decline of Facebook has become apparent in recent years. I am not talking about the company here, I mean the platform itself.

I stopped using Facebook as a social media tool a long time ago. I still use it as a messaging and event organizing app, but rarely to post something.

As we are witnessing the decrease of Facebook posting, digital minimalism is on the rise. A couple of factors explain people’s higher sensitivity when it comes to social media behavior.

First, people nowadays know that their data isn’t fully private. In this context, a wave of scandals considerably lowered public esteem for the behemoth of Facebook and its founder.

Another factor is the new “culture” of digital minimalism. A couple of years ago, people would have ostracized someone who didn’t participate in the all-encompassing social media buzz.

Fast forward to 2020 and it is suddenly cool again to keep a low profile on Facebook and Instagram.

Speaking of Instagram, I love this platform. As a photographer, I use it to promote my art and to obtain inspiration from fellow creators.

What I don’t love, however, is the evolution of Instagram. Once a pure photo-sharing app, IG is now mostly a branding and advertising platform for businesses.

To be clear, I would never bash specific influencers for being successful. To each their own.

What I don’t like about influencing on Instagram is the sheer dishonesty and money-grubbing culture that surrounds many so-called influencers.

I simply don’t agree with the idea of disguising an advertisement as a real-life, unplanned situation.

If you want to promote a company or product, call the post by its real name: an ad. I might be wrong, but I believe that many other photographers on Instagram share the same view.

All of these reasons explain the upsurge of digital minimalism. As for myself, taming my online presence has been a blessing for my productivity and one of the most useful things I learned through minimalism.

5. Once you start filtering relationships, true friends are counted on one hand

Out of all the things I learned through minimalism, the meaning of true friendship is probably the most eye-opening.

As we become older, we start to realize that college-style party friendships no longer cut it.

We suddenly carry a vast plethora of responsibilities and commitments – leaving less and less space for casual acquaintances. This launches a phase of social prioritization.

We become more and more mindful of what it is we are looking for in a friend.

Consequently, minimalist lessons often relate to stuff, but they also have a profound impact on our social circle.

On par with finding people who push our quests forward, we also need to cut ties to people who may be likable or “fun to hang out with” but not supportive of our personal growth.

In this vein, minimalism helped me focus my energy on fortifying ties with true friends who have been there since childhood all while slowly filtering out people who have no positive impact on my life.

Once I got rid of unnecessary possessions as well as excess subscriptions, a switch turned in my mind and dominos started to fall.

The liberating effect gradually extended to other areas. At first, it felt coincidental but then it became conscious. I needed to apply minimalist rules to different aspects of life.

Simple, once I understood that a few important material things produce the most joy and use in everyday life, I became aware of the importance of a few select productivity techniques, business rules, and social habits.

As an example, I noticed that one of my first online businesses was eating up a lot of my time without producing significant returns.

It was a side hustle next to other, bigger ventures. I decided to sell it and to use the time to work on more flourishing endeavors.

The same happened in my personal life. I had too many sports- and cultural activities that took away gym time but didn’t make me happier or fitter.

I pursued them out of habit and “social expectations”. Needless to say, these activities were scrapped in favor of gym sessions.

7. It takes time to become a minimalist

As with most lifestyle shifts, it takes time to cultivate your minimalist approach. Some people find their priorities in the blink of an eye while others spend months or even years tweaking their minimalist philosophy.

Organizational wit and mental clarity usually ensue after the re-evaluation of one’s priorities. This was my case.

I committed to forming my minimalist mindset throughout a couple of months. I assigned one aspect of minimalism to each month and focused on internalizing that concept.

In concrete terms, I started with one month of apartment decluttering before spending one month organizing all of my subscriptions and monitoring my online presence.

Other months were centered around finding the right balance in my social and professional life.

After two years, I had constructed the essential structure of my life and I managed to build new habits, start new business ventures, and ensure the blossoming of important relationships.

Consequently, harvesting a minimalist mindset over one or two years enabled me to gain control over my life and to succeed in various projects.

As with most endeavors, this didn’t happen overnight. In this context, daily journaling constantly reminded me of the fact that Rome wasn’t built in a day.

8. Convincing yourself is hard, convincing others is even harder

Most things I learned through minimalism meld with personal growth. There are, however, also lessons concerning the impact that minimalism has on society and more specifically on our social circles.

When I first set off on my minimalist journey, I had my doubts. Is it going to engender measurable results? Does this lifestyle even suit me? Is it a waste of time?

These were reasonable questions but once I conceived my minimalist style, I realized that I could make it work for myself. It wasn’t easy, but it wasn’t a moon landing either.

Explaining minimalism to other people, on the other hand, is a pain in the ass. The most annoying factor is that most people have fixed views on minimalism without trying it for themselves.

There are obviously the ones who support you no matter what, but there are also lots of naysayers who cannot decide which is worse: living without a car or avoiding cruise ships.

The answer to other people’s doubts is minimalism itself. Using an essentialist attitude will help you ignore the pesky talk. Simply focus on explaining the basic aspects of your minimalism to the people who matter most and ignore the others.

If these people have your best interest at heart, they will certainly understand or even encourage your pursuit of essentialism.

Useful links on 8 Things I Learned Through Minimalism 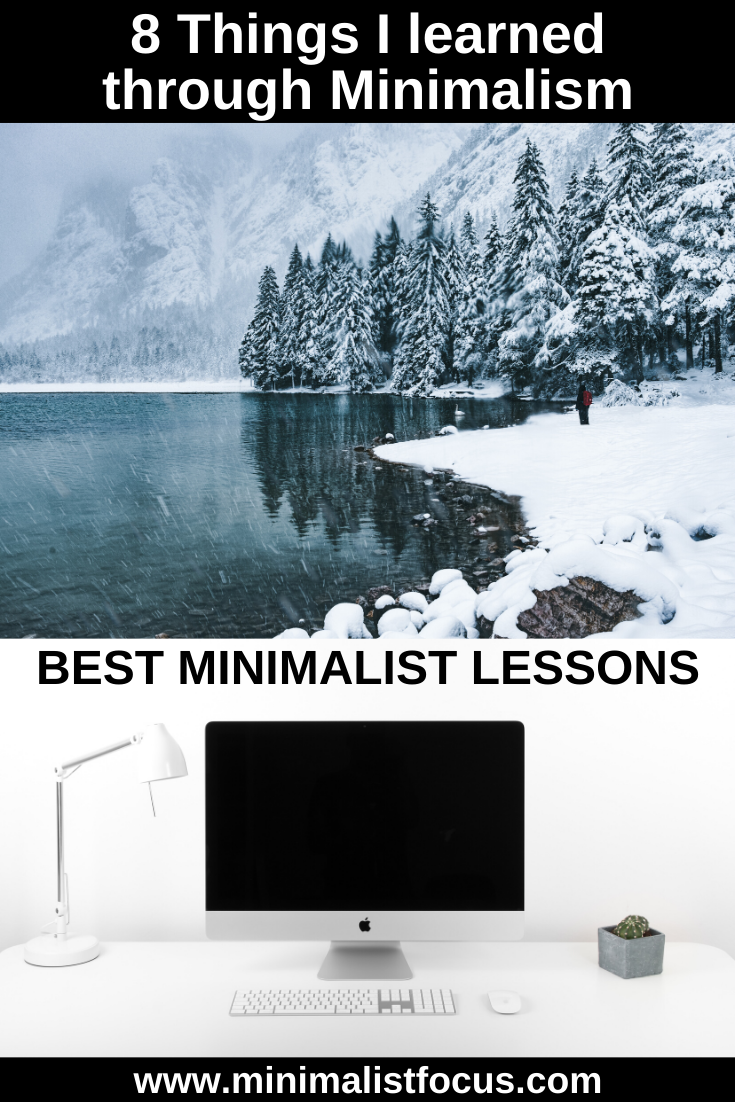