How The 2020 Pandemic Will Inspire a New Wave of Minimalism

In Mandarin, the word “crisis” translates into “weiji.” It contains two characters: “danger” (wei) and “opportunity” (ji). Ergo, a crisis signifies both danger and opportunity in Chinese.

Considering that many people nowadays live to the age of 90 or even 100, it’s baffling to see how many large-scale crises happened in the last century.

In just over 100 years, we’ve survived two World Wars, the Spanish Flu, the Great Depression, the Cold War, the nuclear arms race, innumerable natural disasters, 9/11, and the Financial Crisis of 2008.

Nevertheless, the average person on this planet is wealthier, more educated, healthier, and safer than in any other period in history.

However, every major crisis changed our planet in some ways.

The two World Wars heralded the birth of the United Nations, a somewhat functioning system.

The Spanish Flu was one of the first accelerators for public health policies. And 9/11 changed airport security forever.

When it comes to modern minimalism, many people situate the genesis of the movement somewhere around 2010.

As such, the economic difficulties of the early 2010s made people reflect on their needs, priorities, and values. Many turned to minimalism, and the movement cemented itself.

What is the parallel to today?

The current COVID-19 pandemic has been ongoing for a few months now. Countries slowly reopen, but the long-term impact remains unknown.

Don’t get me wrong. I am not trying to predict the future of remote work, travel, or public health. I am, nevertheless, convinced that the 2020 Pandemic will inspire a new wave of minimalism.

As the Chinese expression states, we are facing lots of dangers but we also have new opportunities.

How the 2020 Pandemic will inspire a new wave of minimalism

These unprecedented times will create economic hardship, but they will also enable us to reflect on our priorities. As such, we’ll re-evaluate our consumerist mindset.

On this basis, here are five ways in which the current crisis will inspire a new wave of minimalism.

Even the most optimistic forecasts predict a global recession in the coming months.

In the US, unemployment numbers are at record heights. In that same vein, hundreds of thousands of businesses are fighting for survival.

The long-term severity remains unpredictable, but many more people will lose their jobs.

The crisis will affect everyone in one way or another.

Consequently, these times will force lots of people to live on a tighter budget. They will also lead to more deliberate spending habits.

Frugality and minimalism are not the same, but they often go hand in hand. I believe that the current crisis will amplify both.

People will start to live more frugally as a result of less disposable income.  They will, on the other hand, also rethink their buying habits. Intentional consumption will become a new mantra.

Minimalism is all about defining values, and these are often the result of a reflective process. That’s where a new wave of minimalism will emerge during people’s quarantine.

For many people, the quarantine will be a time of reflection

Before the world ground to a halt, I had been on the road full-time. From Singapore to Thailand, Germany, Argentina, Uruguay, Austria, and Bulgaria, 2019 had been a continuous globetrotting romp.

Starting in March 2020, I suddenly had to remain in one place for months at a time.

Not that I didn’t relish the pause – it was a refreshing break from non-stop travel, but it was mostly an opportunity to slow down and to reflect.

As it turned out, I wasn’t the only one. During the quarantine, many people started to rethink their values and goals.

Is this corporate ladder worth the climb? Shouldn’t I spend more time with my loved ones? How important is travel and adventure in my life?

Reflection became an essential part of daily life, and most people went on some kind of character journey.

That’s where minimalism will experience a new dawn.

Minimalists question their values consistently – with or without a lockdown.

That is why many of us have been coping better with isolation than most of society. We are used to embarking on personal development journeys. The 2020 Pandemic merely intensified our mindful living habits. Now, a much larger part of society will hop on the personal growth train. People who previously had no interest in mindset development had to participate.

People who lived in a work-bills-entertainment bubble now understand the meaning of mindfulness.

In this context, the minimalist mindset will undoubtedly receive new adherents.

That doesn’t mean that everybody will adopt the same values – quite the opposite.  If you follow this blog, you’ll know that I regularly highlight the variety of minimalist lifestyles.

I believe that a few common minimalist principles can generate diverging results – all based on the idea of prioritization.

That’s where the quarantine will benefit minimalism as a culture. The culture will widen and more minimalist lifestyles will ensue.

By and large, this will be positive for society.

The junk in our homes becomes more visible

Let’s be honest. We’re all guilty of accumulating stuff without noticing.

A new kitchen gadget here, a couple of video games there – and the junk rapidly piles up.

That will probably change. Remote work has taken unprecedented proportions in 2020, and many people now spend more time than ever in their homes.

The new way of working will lead to two realizations.

First, people will start to recognize that they own too much. All those unnecessary clothes and memorabilia become much more visible as people spend more time in their homes.

Sure, you can still fill a “junk room” with all the stuff you don’t need, but the more time you spend at home, the more you’ll become aware that your house is full of superfluous items.

Secondly, we’ll need to clean more often and also want more organized homes. Because we spend most of our time indoors, we become more sensitive to the clutter in our living spaces.

In this context, people will also come up with fresh ideas to spruce up their homes. More often than not, these ideas will incorporate minimalist elements and design features.

Consequently, the new wave of minimalism will extend to the areas of design and home organization.

Most people now understand the meaning of “prioritization”

During times of crisis, the concept of “prioritization” comes to full fruition.

When financial resources are scarce, we start to identify priorities and allocate our income accordingly.

Financial prioritization is vital, but it’s only one piece of the puzzle.

Governments use the word “essential” frequently these days. We hear a lot about “essential services,” “essential workers,” and “essential goods.”

We finally consider healthcare workers – who have been crying out for better conditions for many years – as “essential.” Supermarkets have become primordial lifelines for society, rather than mundane everyday structures. And finally, even Amazon had to prioritize.

Consequently, every part of society now understands the idea of prioritization, both on an individual and collective level.

Priorities can change, but they always exist. The main takeaway here is the following: no matter what stage of life we’re in, we need priorities.

For many people, minimalism will be the answer.

Us minimalists have been preaching prioritization and essentialism – as in, focusing on essential activities and possessions in our lives – for decades.

The rest of society now understands what we mean.

Excessive consumerism will take a hit

I am not saying that excessive consumerism will disappear in the 2020s. People will still buy useless junk, and generic ads will remain ubiquitous.

Many people will, however, come out of this crisis with a different mindset. Intentional consumption will become much more prevalent, and buying habits will change.

It’s impossible to predict which goods will become obsolete, but our consumption behavior will evolve, as it has done after every crisis.

Many “experts” predicted the disappearance of big SUVs in the aftermath of the 2008 Crisis. That didn’t happen. The Ford F-150 is still the best-selling car in America. Similarly, small SUVs and crossovers like the VW Tiguan are among the most popular vehicles in Europe.

And here lies the point.

The 2008 Crisis didn’t kill off SUVs, but it changed their stature. Today’s Ford F-150 is still big and plucky, but more economical. Ten years ago, there were very few small, priceworthy European SUVs. In 2020, every European carmaker sells at least one crossover model, from Peugeot to BMW, Seat, and Skoda.

Many industries and businesses will reposition themselves over the coming years.

Will social media influencing continue in the same way? Will the travel industry change like it did after 9/11? Will fashionistas continue to spend ridiculous money on logos?

All of these questions are impossible to answer right now. Consumer behavior might tilt into one or the other direction, but one thing is for sure: there will be long-lasting change.

One aspect of this lasting change will be a new wave of minimalism.

To end on a positive note, here’s an ode to change.

Throughout history, humanity thrived as a result of changes. Every crisis led to spearheading innovation, and many devastating downturns preceded even bigger booms.

Many people compare the 2020 Pandemic to the Spanish Flu.

Here’s an analogy for you: the Spanish Flu preceded the roaring 1920s – a time when the “parties were bigger,” the “buildings were higher,” the “morals were looser,” and the “liquor was cheaper.”

What kind of story will be written by a modern-day F. S. Fitzgerald in the 2020s? 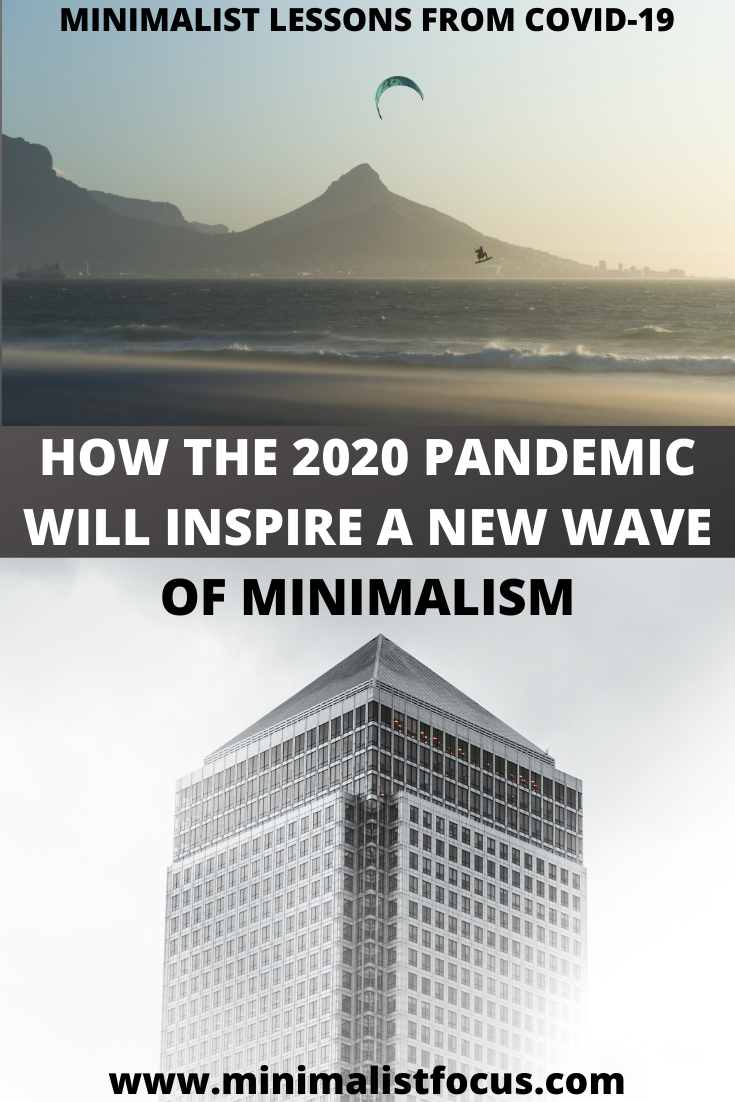