In our current era, more and more people question their consumption habits, their endless connectivity, and their general priorities. The idea sounds tempting, but many first-timers struggle to create their version of minimalism. Newbies are happy to hop on the prioritization train, but often fail to understand its stations. On this basis, here are 6 common struggles for first-time minimalists.

Minimalism is not a fixed set of norms. It is a journey toward freedom, productivity, and mindfulness.

This journey is personal. While most minimalists share common principles, everybody has to find their best route.

The most common struggles for first-time minimalists

The following are some of the most common bumps along the way. Those are the problems most people face when adopting a minimalist lifestyle.

Where do I start?

Most aspiring minimalists ask themselves: how do I start with minimalism?

Should I declutter my home? Get rid of 80% of my stuff? Or just eschew a few non-essential activities?

These ideas are valid, but they beat around the bush.

Minimalism only works in conjunction with the right priorities. As such, you need to start with the definition of your priorities.

These priorities can evolve, but they always guide you.

Consequently, before throwing out stuff and unfriending people on Facebook, take a piece of paper and write down priorities. Ask yourself: why do I want to become a minimalist?

Once your why is clear, the practical implications will become apparent.

As an example, I originally became a minimalist because I wanted to travel more.

I found that less stuff, fewer financial constraints, and more professional output would bring me closer to that goal.

I can nowadays travel for the majority of the year because I used a minimalist approach to organize my life according to my travel ambitions.

Some people want to become minimalists to practice a sustainable lifestyle. Others simply want more productivity.

Whatever your goals, once you know why you want to become a minimalist, the first steps will be much easier.

Decluttering sounds simple. Get rid of the non-essential, focus on what adds joy and value to your life, and only buy long-lasting products.

There are, however, objects you aren’t sure about.

What about those World War Two lamps my grandmother left me?

If you’re new to minimalism, you might not know how to evaluate sentimental objects.

Let me tell you a little secret: not all sentimental objects are created equal.

Over the years, I’ve developed a few keep-or-sell rules that help me decide whether an object should be kept or purged.

Try to measure the intensity and durability of the object’s sentimental value.

Are you going to feel the same way about it 10 years from now? Is it an emotional connection that burdens you? Is the item linked to a positive experience?

Ultimately, you’ll have to assess the strength and importance of the sentimental value. If you spot a continuous decrease, the object’s emotional worth might be short-lived.

The “just in case” idea

People often hold the “just in case” concept against minimalism. But what if I need this item in 6 months, shouldn’t I keep it just in case?

This might sound like a reasonable point, but it never ends. Once you’ve adopted a “just in case” mantra, you’ll never get rid of anything.

The simple truth is that even a moon buggy could be a “just in case” possession. After all, you might travel to the moon someday.

There are naturally various degrees of “just in case.” That’s where first-time minimalists often struggle.

They fail to differentiate between items that will probably be useful soon and the ones that could maybe be useful in the distant future.

In the case of uncertainty, the best course of action is to analyze how probable the item’s usability is.

If the chances are low, it is not a “just in case” possession, but a “nice to have.” That doesn’t mean you shouldn’t keep it.

If it adds joy to your life, any “nice to have” possession can make your life better.

You should, however, intentionally own and keep it. You should know that the item is not essential.

Consequently, if you are consuming intentionally, the “just in case” idea will be solved. You’ll be able to recognize whether something is essential or not.

And if it isn’t, you can still keep it in conformity with your consumption norms.

The biggest struggle for any minimalist rookie is to explain his or her new lifestyle to friends and family.

There is a simple solution. Instead of throwing “minimalist” – a strong word – at them, call yourself an essentialist.

Trust me, it works every time. Most people have no reservations when hearing the term “essentialist.”

There are some differences with the word “minimalist”, but in most cases, the philosophies overlap.

If you don’t know how to tell your peers and loved ones about your minimalism, just tell them that you are an essentialist who focuses on the essentials.

And you are concentrating your energy, resources, and time on the essential components.

Yes, that sounds a lot like minimalism, but to most people, essentialism appears like a more neutral, sober concept.

As with other habits, the challenge resides in building minimalist systems.

Before buying object X, you need to think about its true value. Not its dollar value; the value it will occupy in your life.

As minimalists, we buy and consume according to pre-defined norms. These norms rest on the ideas of mindfulness and prioritization. And these ideas trigger chain reactions.

If you want to use minimalism as a means to attain more productivity, you’ll need to internalize these chain reactions.

In simple terms, every purchase should respect your pre-defined consumption rules. Every decision should be scrutinized according to your priorities. And every work-related task should undergo your essential or non-essential test.

Use this process consistently, and it will automatize itself. And once you’ve built those minimalist habits, they will become a natural part of your everyday life, just like breakfast and showering.

Finally, society and consumerism are undoubtedly among the most common struggles for first-time minimalists.

Akin to finding your minimalist starting position, your why will help you navigate social stigma and consumerist prejudices.

Organize your minimalism in a manner that works for you. You won’t have to deal with people’s opinions if you know that you are designing your life for the better.

Whatever people think minimalism is, they are right. And they are also wrong.

The rules of minimalism are not set in stone. And neither are society’s views on minimalism.

That’s why you can easily overcome the social stigma struggle by always remembering the flexibility of minimalism as a concept. 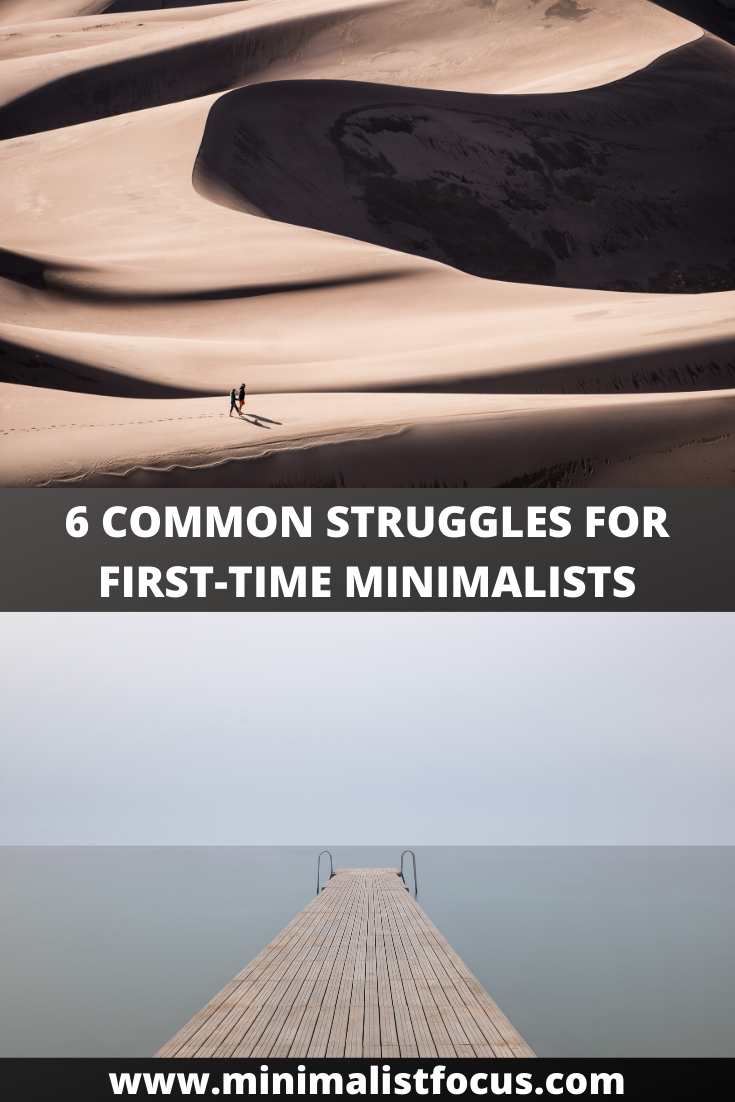