10 Books That Changed My Life

Can books really change your life? I believe they can. A combination of wisdom, usability, and timelessness is rare – but once attained – it can engender an eye-opening lesson. On this basis, here are ten books that changed my life.

If you follow this blog, you’ll know that I read a lot. By “a lot,” I mean more than most people. I read 3-4 books every month, and I am always on the hunt for new inspiration – be it fiction or nonfiction.

While most books lack the ominous “eureka moment,” some have strongly influenced my thinking over the years.

As I like to diversify my reading, my top 10 life-changing books don’t cover one particular topic. Accordingly, they come from different fields and different eras.

10 books that changed my life in no particular order

Without further ado, here is a list of 10 books that changed my life for different reasons. Some feature on this list for their pure wisdom, others for their mindset-altering lessons, and the rest for their timeless literary greatness.

Few books do a more compelling job than Guns, Germs, and Steel when it comes to deciphering the history of humankind.

Most people know Yuval Noah Harari’s 2011 masterpiece Sapiens. What most people don’t know is that Jared Diamond’s 1997 book served as inspiration for Sapiens.

So why do I count Diamond’s work among the ten books that changed my life? In short, Guns, Germs, and Steel is the most engrossing rebuttal of human prejudice ever written.

On hundreds of pages, Diamond uses well-researched historical episodes from all over the world to demonstrate that the development of our planet’s regions is the result of three things: guns, germs, and steel.

In the 1990s, this was a ground-breaking theory.

For most of the 20th century, humanity believed in the dogma that Eurasian success – that is, the power to conquer other civilizations – was rooted in intellectual, moral, and genetic superiority.

Diamond’s book was one of the first mainstream bestsellers to reject this doctrine. A fascinating account of human history – Guns, Germs, and Steel explains why the Spanish conquered the Inca, not the other way around.

It also sketches out the different phases of human development and how the meaning of “development” varies around the world.

All in all, Guns, Germs, and Steel is undoubtedly my favorite book about human history. Even though I also enjoyed Sapiens, I find its precursor a tad more gripping.

Guns, Germs, and Steel by Jared Diamond on Amazon

I chose not to count Sapiens among the ten books that changed my life, but its successor, Homo Deus, does have a place on this list.

Homo Deus is an audacious prediction of the 21st century – how the evermore engulfing use of technology will shape humanity. Its outlook is buoyant and concerning at the same time.

It took Harari ten years to write Sapiens and only two to write Homo Deus.1 That doesn’t scream thoroughness, does it?

Fear not, Homo Deus is by no means inaccurate or botched. It is, however, much more future-bound than Sapiens. Will all of Homo Deus’ predictions come true? Nobody knows.

Even though I don’t believe in everything this book predicts, I was amazed by its boldness. Not all of its claims will stand the test of time, but 100 years from now, historians will probably beam a hologram of dead Harari from their supercomputer with the phrase: “this guy predicted it first.”

Yes, The Game is a pickup book, and pickup books don’t have a good reputation. A book teaching men tricks and shenanigans to attract women – that can’t be a recommendable read, can it? It most definitely can.

The Game is much more than an account of one man’s transformation from a shy journalist into one of the world’s most successful womanizers. The Game is mostly a story about self-discovery and human interactions.

Neil Strauss is undoubtedly a gifted writer, but even more so, he analyzes human behavior in a way not many authors have done before. That’s ultimately why The Game became a mainstream success, way beyond the young reader who wants to learn “game.”2

Better still, The Game questions society. Neil Strauss perfectly exposes the pros and cons of game and the impact it has on the dating culture in America.

In his 2015 sequel The Truth, Strauss even admits that game, promiscuity, and an indefatigable sex drive ruined his life – just to fix it again.

For the record, Strauss has been happily married for a couple of years. As such, he worries no more about all the proclivities mentioned in The Game and The Truth.

A cultural wakeup call, many authors have tried to emulate the success of The Game by documenting their own pickup history. Most have failed spectacularly.

The Game by Neil Strauss on Amazon

Full of valuable lessons, Tony Robbins’ 1991 book is still among the most celebrated works in the personal growth genre.

It is one of my favorite books because it does away with all the “you can do it” platitudes and offers some real guidance. It also works well with minimalist principles and forces you to re-evaluate your thinking patterns.

In a nutshell, Awaken the Giant Within describes a handful of mantras, all of which will have a positive impact on your life.

The gist of Robbins’ ethos is the following: take your own decisions and start implementing small changes to gradually reach a bigger goal.

Illustrated by helpful examples, Robbins’ message is congruent with a minimalist mindset and practicable for people from all walks of life.

Awaken the Giant Within by Anthony Robbins on Amazon

Marcus Aurelius was one of the “Five Good Emperors” in Roman history and among the most influential ancient Stoic philosophers. His personal notes – compiled in the book Meditations – contain priceless life lessons as well as immortal wisdom.

Gregory Hays’ new translation of Marcus’ 12 books may be a ponderous read, but also an incredible trove of Stoic principles.

It took me three attempts to finish the book – but once I did, the aha moments started to multiply. Written over 2,200 years ago, Meditations remains one of the greatest self-development books of all time.

Mastery was the first self-growth book I ever read. And make no mistake about it, the message was life-changing.

Robert Greene is one of the most successful personal development authors in the new millennium, and for good reason.

Well-known for his 1998 debut The 48 Laws of Power, Greene’s 2012 book studies different forms of mastery and genius – ranging from Leonardo da Vinci to Albert Einstein and Charles Darwin.

By no means superficial, Greene’s bestseller scores points with an in-depth analysis of mentorship, dedication, and talent.

What I love most about this book is the reasoning that none of these elements create mastery on their own. Only in conjunction can discipline, leadership, and know-how spawn genuine brilliance.

On this basis, if you want to chase your goals with more tenacity, more discipline, and less anxiety, Mastery is a great book to start with.

Mastery by Robert Greene on Amazon

Few modern books capture the spirit of Stoicism better than The Obstacle is the Way by Ryan Holiday.

A successful author and entrepreneur, Holiday has written for magazines like Forbes, the Guardian, and Huffington Post but also smaller publishers.

His 2014 book offers practical lessons on how to turn obstacles into opportunities – analogous to Marcus Aurelius’ teachings. The book’s motto is the application of ancient Stoic wisdom to 21st-century challenges.

Well illustrated by lessons from historical greats such as Napoleon, Gandhi, and John D. Rockefeller, The Obstacle is the Way succeeds triumphantly in expounding the use of Stoic values throughout the centuries.

The Obstacle is the Way earned praise from a diverse set of high-performers. In this context, its admirers notably include Arnold Schwarzenegger and Bill Belichick, the coach of the 2014 Superbowl-winning New England Patriots team.

The Obstacle is the Way by Ryan Holiday on Amazon

When it comes to my top 10 life-changing fiction books, The Alchemist by Paulo Coelho definitely makes the list.

The story about an Andalusian shepherd who travels to the Pyramids of Giza in search of a grandiose treasure is a captivating tale of self-discovery and ever-recurring hurdles.

Originally written in Portuguese, Coelho’s international bestseller has been translated into 80 languages – and hailed all over the world for its simple yet powerful message.

The Alchemist’s primary lesson is the following: we all have dreams and aspirations, and we ought to follow them. We should, however, in the process, relish the simple joys in life.

Timeless and instructive, The Alchemist is one of the ten books that changed my life because it acts as a moral advocate for the pursuit of dreams – all while building a strong case for the utility of failure.

The Alchemist by Paulo Coelho on Amazon

Imitated, adapted, and interpreted on numerous occasions, Kerouac’s 1957 novel remains one of the most enthralling fictional travel memoirs ever written.

The story is based on Kerouac’s own travels across the American continent. Full of hardship, peril, but also fun, the book follows the narrator, Sal Paradise, and his friend, Dean Moriarty, from adventure to adventure and from mishap to mishap.

On the Road depicts the carefree spirit of postwar jazz-loving America, but it also raises questions related to love, work, and the perennial journey that is life.

As a passionate traveler, I love the adventure aspect of this book, but there is more.

On the Road is, in my view, one of few books that succeed in merging juvenile fun with deep philosophical questions. Its message isn’t limited to the “follow your passion” credo. It proves that one’s passion can ultimately be the pursuit thereof and that this quest may never end.

That’s the main reason why this 1950s novel is among the ten books that changed my life. It demonstrates – with great literary skill – that sometimes, the journey toward a certain objective is the real goal.

On the Road by Jack Kerouac on Amazon

Lots of wealthy entrepreneurs turn to literature once they feel that books will advance their empires.

Not Ray Dalio. Worth over 18 billion dollars, Dalio spent years compiling a series of rules he followed to grow his business and to thrive, both on a personal and a professional level.

Dalio’s principles transcend the art of Wall Street wealth accumulation. Diving into various aspects of life, they offer practical guidance to people who wish to take more control over their endeavors.

In Principles, the founder of Bridgewater Associates manages to share his versatile experience as a Wall Street investor while keeping his two feet on the ground – creating a highly usable piece of literature in the process.

Useful links on 10 Books That Changed My Life 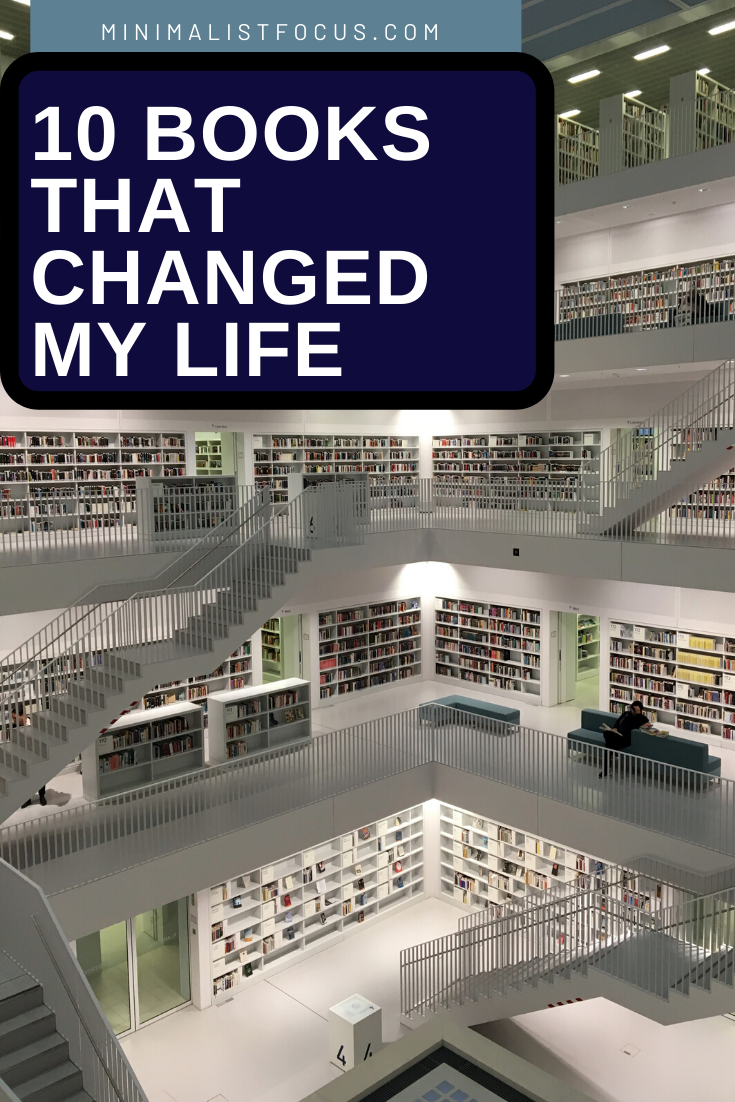