If You Want to Improve in 2021, Stop Wishing For Normality

In our current climate, many people use the phrase “when things go back to normal.” Such an attitude has negative consequences. “Normality” is a volatile concept. Throughout all of our history, changes helped humans evolve and thrive. On this basis, if you want to improve in 2021, stop wishing for normality.

“Normal” was undoubtedly one of the most-used words in 2020.

I will travel again when things go back to normal. We live in the “new normal.” And most importantly, I wish for normality.

The Oxford English Dictionary defines the term as “the state of being usual, typical, or expected.”

However, normality is a weird idea. If you look at the last 100 years, very few decades could be described as “usual, typical, or expected.”

One hundred years ago, we had the Spanish Flu Pandemic in the middle of a World War. Shortly afterward, the US introduced Prohibition. In the 1930s, fascism was on the rise all over Europe. The 1940s brought us another World War. In the 1950s, the world had to battle yet another flu pandemic. The 60s saw the construction of the Berlin Wall. And the list goes on.

Improve in 2021 by rejecting the idea of normality

Normality is a dangerous concept for several reasons.

First, it supposes that we should have expectations. And these expectations create a mental blockade that will prevent us from adapting to change.

However, change is inevitable. Our relationships, the economy, and our dreams and hopes consistently evolve.

In the words of the Greek philosopher Heraclitus,

“Change is the only constant.”

Consequently, if you want to improve in 2021, stop wishing for normality.

In 2020, our idea of normality fueled our anxiety and hindered our productivity

Over the past couple of weeks, I spent a lot of time journaling. I tried to get to the root of my 2020 wins and failures, and I realized that one primary thought pattern was responsible for my tribulations: expectations.

In this context, here is a journal extract from April 5:

“When will I be able to travel to Asia? Closed borders and a lack of flights are abnormal. I am a digital nomad, after all.”

To give you some background info, I was on the road for most of 2019, and I had planned to spend the first six months of 2020 in Asia. The Pandemic canceled those plans.

My digital nomad lifestyle – my “normal” – got a forced break. I also lost 70% of my income and a lot of clients. The result was anxiety, moodiness, and lots of lazy moments.

At some point, I realized that my idea of normality was a farce. In 2019, I traveled a lot, but that wasn’t “normal.” It was just my lifestyle for a particular stretch.

Consequently, waiting for things to go back to normal  – as in, border reopenings – was a destructive mindset. I needed to stop waiting and eschew the idea that digital nomadism is normal.

I observed similar thought patterns in my social circle. The ones who don’t travel frequently were waiting for nightclubs to reopen and stadiums to refill. They all wanted to return to normality.

The solution was to stop waiting and adapt. Instead of expecting something – a normal state, it was time to focus on what we can do in the present.

With this revamped attitude, my anxiety disappeared. I started new business ventures, learned novel skills, and focused on rebuilding my freelance customer base.

In short, I was busy, and my productivity increased.

A few months later, I was back on the road. European borders reopened, and I re-embarked on my digital nomad odyssey without waiting for anything – just living every day to the fullest.

In the 21st century, those who thrive are the ones who adapt

Much like avoiding inaction by waiting for normality, adaptation is critical in the 21st century.

As Yuval Noah Harari stated in a 2018 interview with Wired,

“Since we have no idea how the world and the job market will look in 2050, we don’t really know what particular skills people will need. […] Most important of all will be the ability to deal with change, to learn new things, and to preserve your mental balance in unfamiliar situations.”

Nobody argues with the fact that technology, societal shifts, and new cultural thinking will change our lives in the 21st century.

However, many people cannot fathom the speed and intensity of these changes.

Like many other crises in history, the 2020 Pandemic accelerated pre-existing trends. Remote work was a thing before 2020, but the lockdowns kick-started its popularity. In that same vein, virtual experiences existed in 2019, but they became ubiquitous in 2020.

There is a good chance that many other changes that were already happening will receive a boost.

Consequently, if you want to improve in 2021, start by training two skills:

These are the skills that will help you get through the rest of this Pandemic. Better still, they will help you master inevitable challenges in the coming decades.

Here’s my top tip on how to improve your life in 2021: stop worrying about “normality” and start focusing on what you can do each day to become a little bit better.

No matter if you want to start a muse project in 2021, become fitter and healthier, or find more meaningful connections, daily improvement will be the key to success.

As such, you need to focus on the present instead of lamenting the current lack of “normality.”

Connect to the present with daily mindfulness rituals like journaling. Build your daily routine around core habits that will secure peace, stillness, and productivity. And finally, 2021 is the ideal time to give up some of your most destructive attitudes.

Useful links on How to Improve in 2021 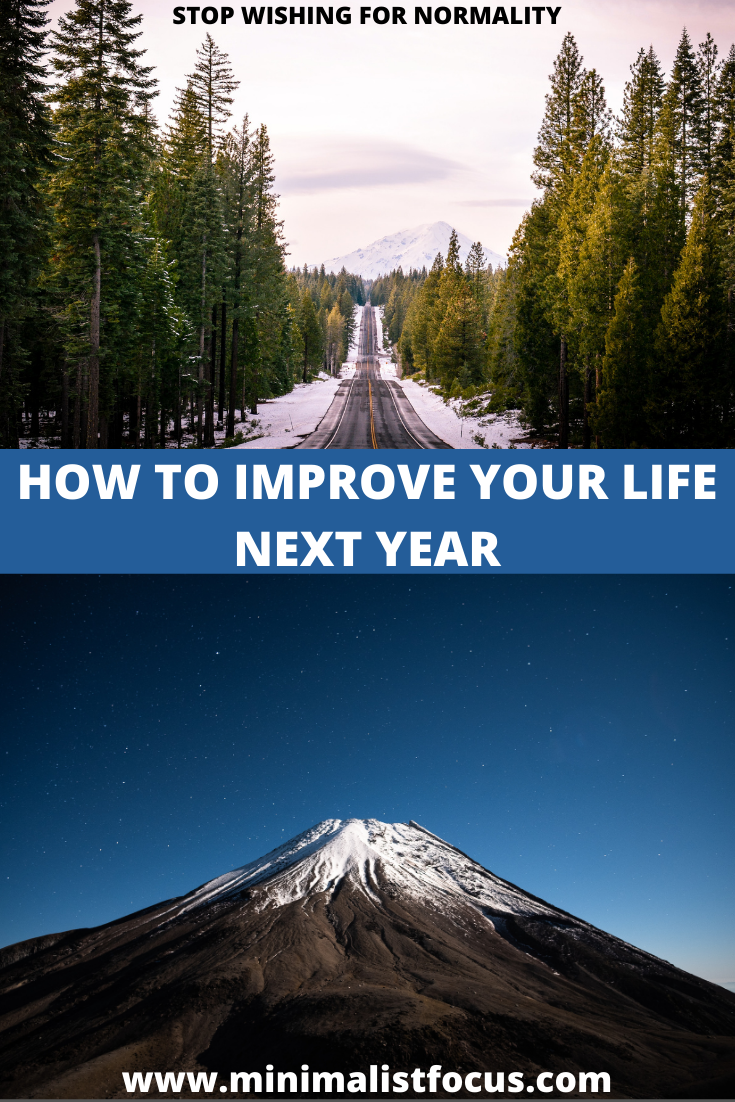